Have you ever wondered what protects your head and what goes on inside a motorcycle helmet? 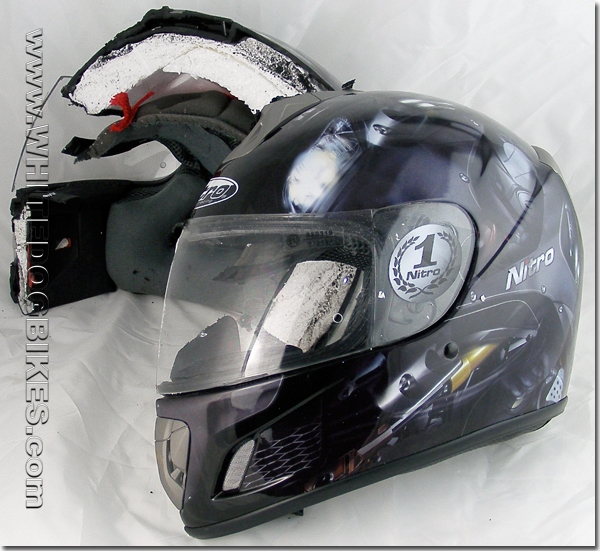 We have cut a Nitro Motorbike Helmet in half (NGFP Panther full face helmet – RRP £69.99) to show the features and what gives this helmet it’s 4 Star Sharp safety rating! 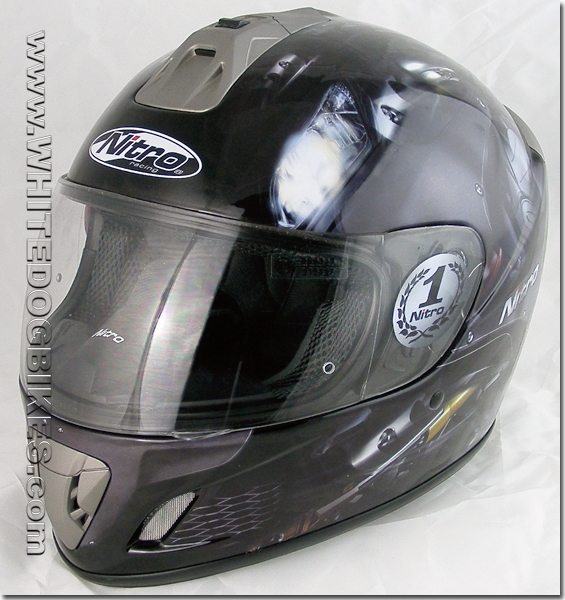 NGFP Panther front view before being cut in half. 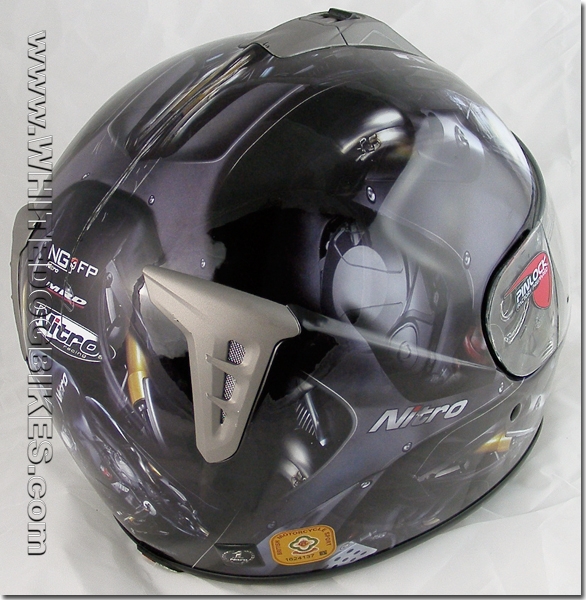 NGFP Panther back view before being cut in half. 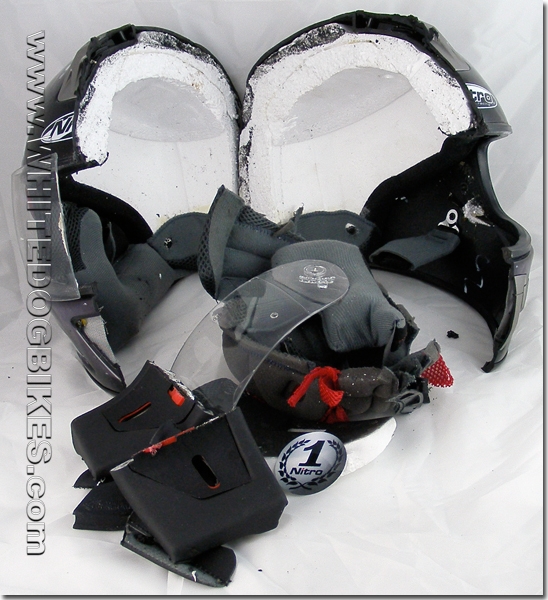 NGFP Panther cut in half with all the bits!

How did we cut the helmet in half?

The helmet was cut in half using an air powered grinding tool for the shell, a long bladed hacksaw for the EPS filler and a Stanley knife for the liner material. 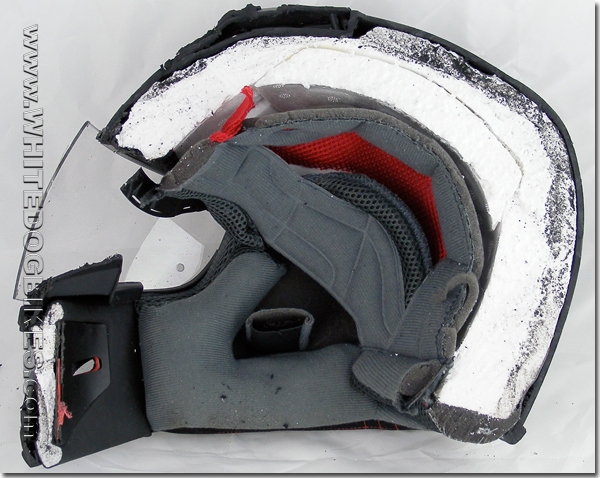 NGFP Panther cut in half showing the shell, EPS and helmet liner 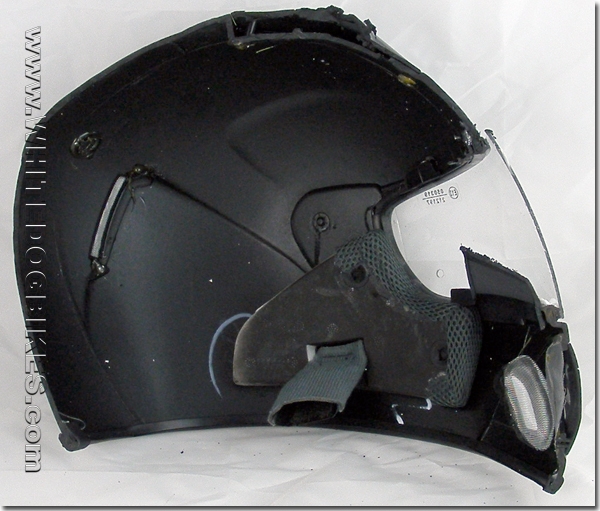 The outer shell is a MTP (multi poly-tech) shell (basically polycarbonate) and is between 3.5mm and 5mm thick. The shell is fairly uniform in thickness and, unlike the flip front helmet we previously cut in half, seems to only be fractionally thicker in the more vulnerable areas. 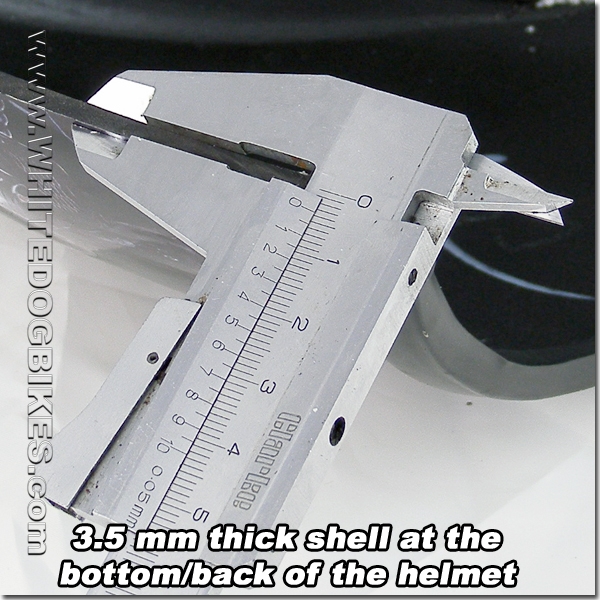 Bottom/back of the outer shell showing the thickness 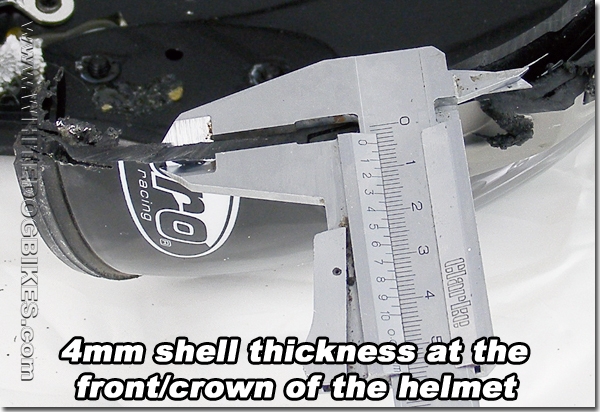 Front/top of the outer shell showing the thickness 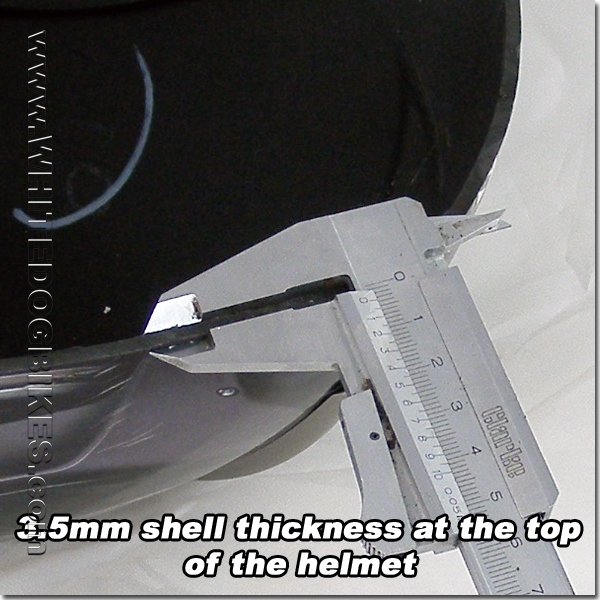 Top of the outer shell showing the thickness

As we previously found out by testing the shell of a Gmac Futura flip front helmet, the multi polytech shell of the NGFP Panther is easily able to withstand being attacked by a bench grinder which seems to indicate it would hold up well going down the road.

The important thing to note about this shell (and pretty much all motorcycle helmet shells!) is once they are cut in half they become very flexible and loose the structure and rigidity. This is why it’s important to replace your helmet after a crash, especially if it’s got a crack in the shell (just remember that not all cracks can be seen by the naked eye!) 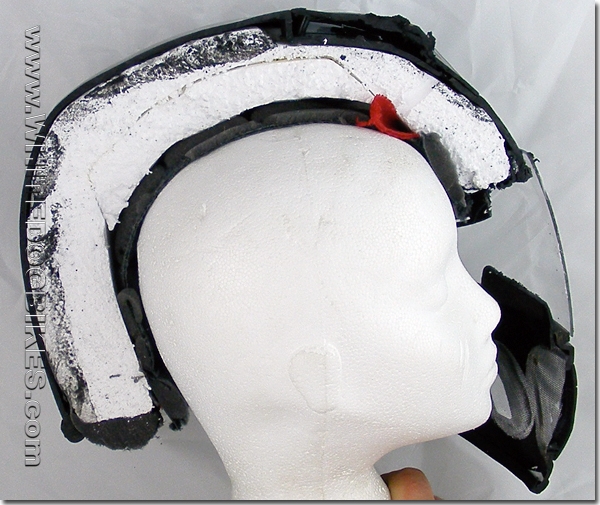 The chin vents…..
The front vents are located on the chin of the helmet (there’s a mesh vent either side of the chin and a covered center vent). There’s a button on the inside of the chin which can be opened or shut depending on if you want the ventilation to come inside the helmet or not. 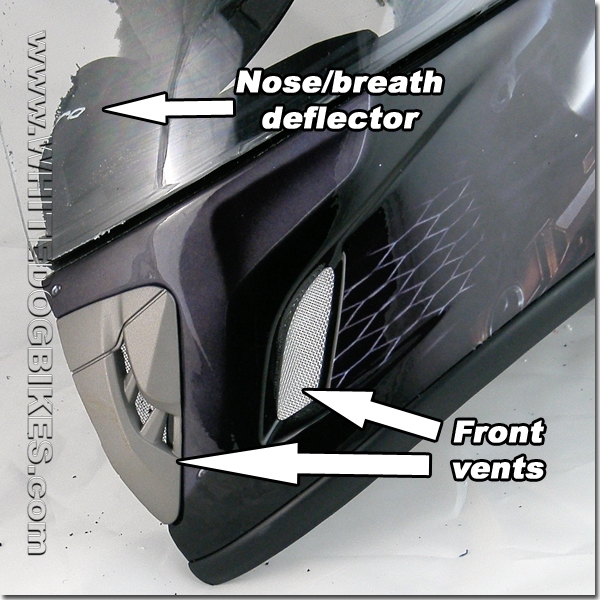 The front vent inlets on an NGFP Panther helmet

Unlike the Nitro F341 we cut in half, there doesn’t seem to be any air deflected up to clear the visor, instead the NGFP Panther has a nose guard to deflect the riders breath away from the visor to reduce misting on the visor.

The top vents…..
The top vents on this helmet have 2 purposes. As well as passing air onto the top of the head air from the vents is also diverted to the rear / exhaust vents which help to remove warm air (which is good in the summer!) and also help to stabilize the helmet at higher speeds. 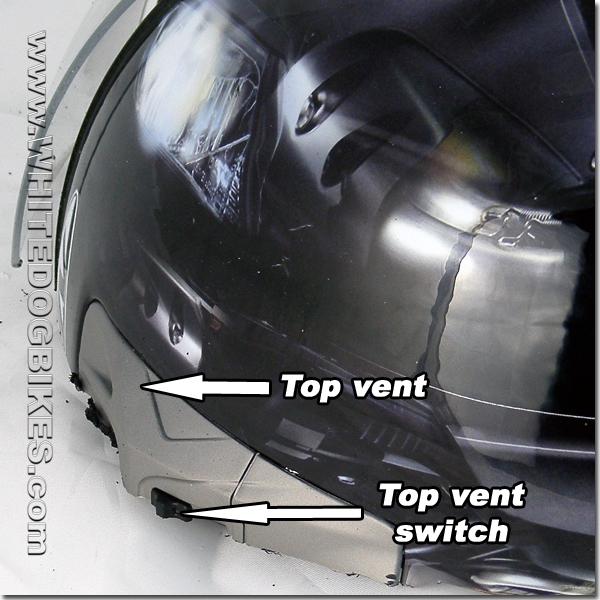 The top vent inlets on an NGFP Panther helmet

The top vent has a small, black open and close button in the center so the air can be turned off. When open, the air is channeled down through channels in the EPS liner onto the riders head. 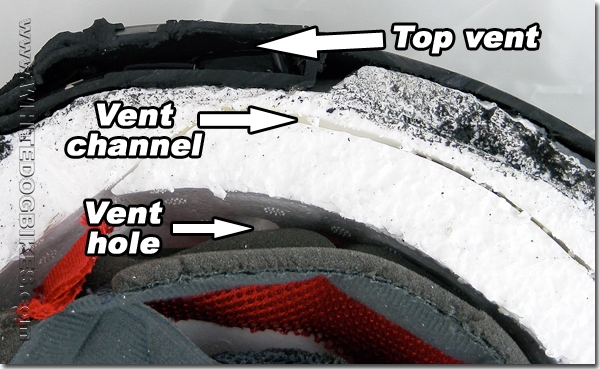 The rear/exhaust vents…..
The rear vents (one on each side) allow any air that comes into the helmet to get out.
This serves 2 purposes, the first is to allow hot air to escape during the summer (this can be mostly stopped by closing the top and front vents). The second purpose is to allow the air to ‘flow’ through the helmet, giving the helmet more stability at higher speeds. 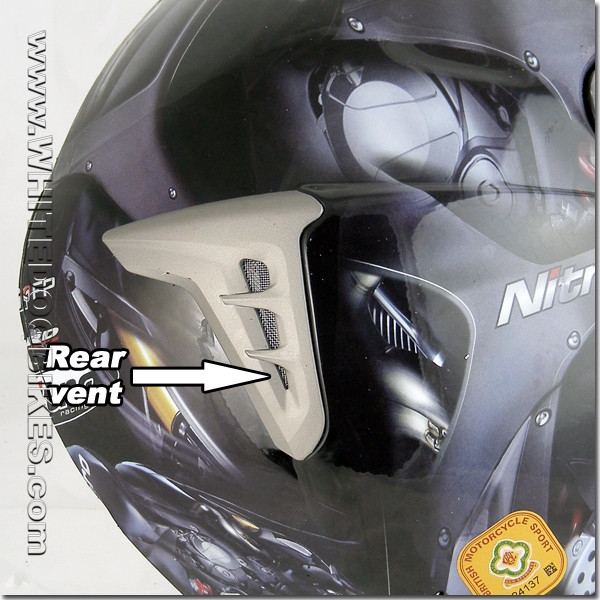 The rear vents on an NGFP Panther helmet 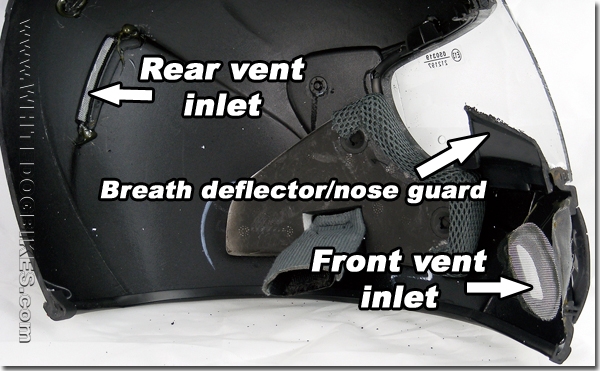 The vents inside an NGFP Panther helmet shell

The securing strap on the Nitro NGFP Panther helmet is the ‘Nitro Micro Metric’ buckle system (you can see how the Micro Metric Buckle works in one of our previous blogs). 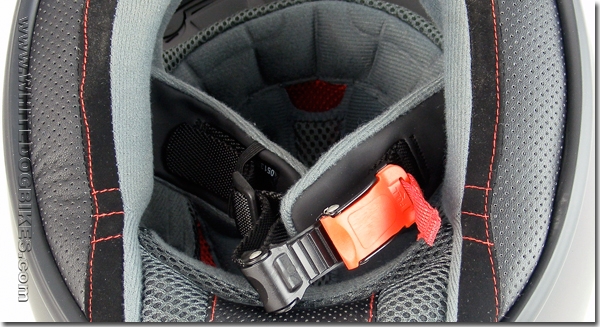 The Micro Metric Buckle system on an NGFP Panther 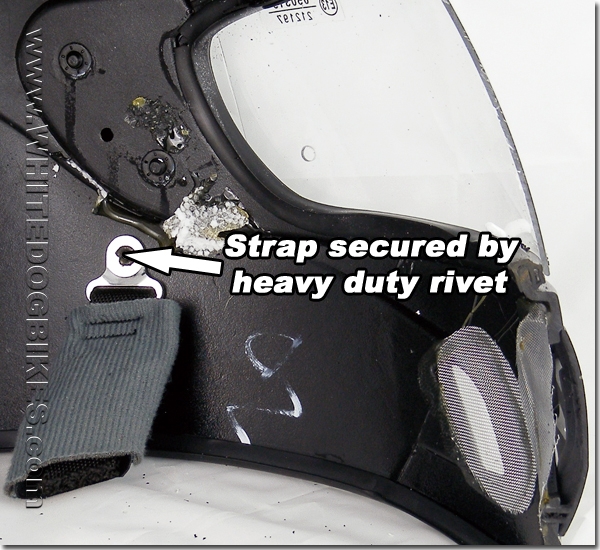 The helmet strap rivet and buckle on an NGFP Panther

The EPS liner (expanded polystyrene foam) is probably one of the most important parts of the motorcycle helmet as it is designed to absorb energy in a crash. 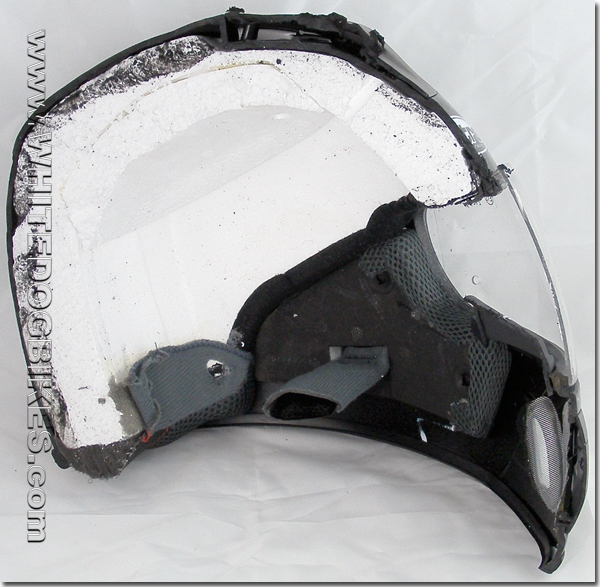 Unlike normal polystyrene, expanded polystyrene foam (or EPS for short) is a tough and rigid, closed cell polystyrene which is very firm to touch and doesn’t easily compress when squeezed. Instead, when extreme pressure is applied, EPS ‘gives’ and crushes which means it absorbs the energy generated when the helmet impacts with something (e.g. the road) in a crash.
Because the EPS absorbs the impact energy, this energy isn’t transferred to the riders head. 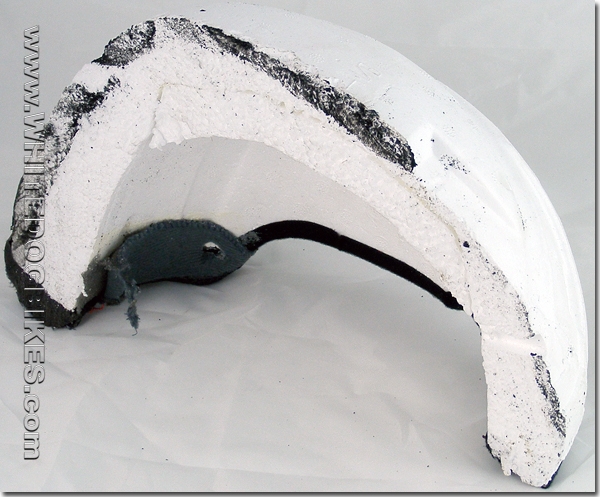 half of the expanded polystyrene foam liner (EPS)

The liner is between 27mm and 59mm thick and it is thicker at the more vulnerable areas of the helmet (crown, top and back of the head) so it can absorb more energy during a crash. 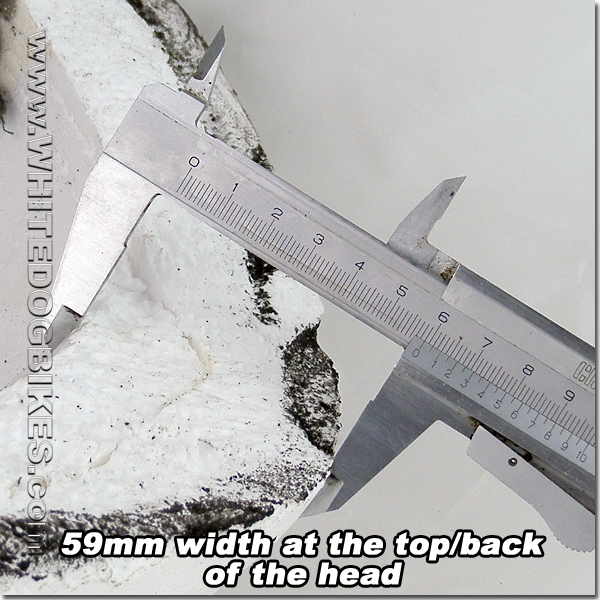 EPS width at the top/back of the helmet 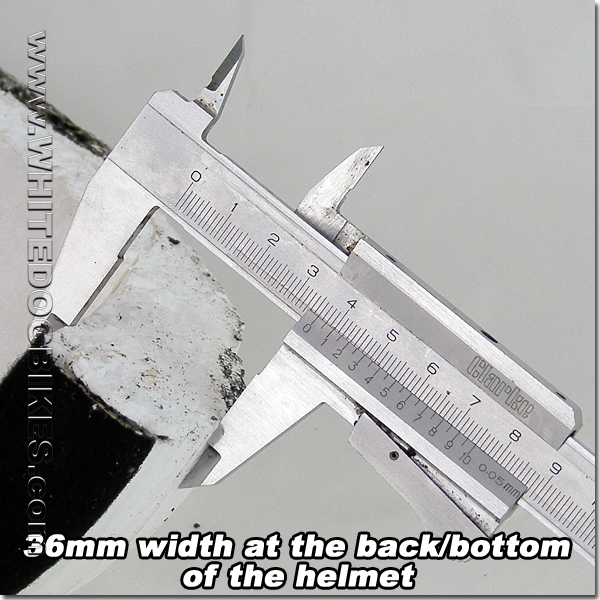 EPS width at the back of the helmet 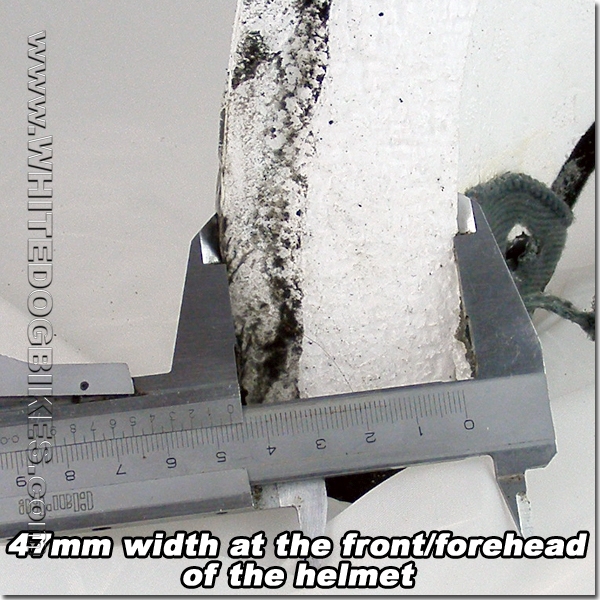 EPS width at the front of the helmet

The expanded polystyrene foam parts have stickers on them stating the model, weight, density, batch number, supplier and date made. There were also a few smaller interior parts of the helmet made from EPS that have this sticker on them as well. 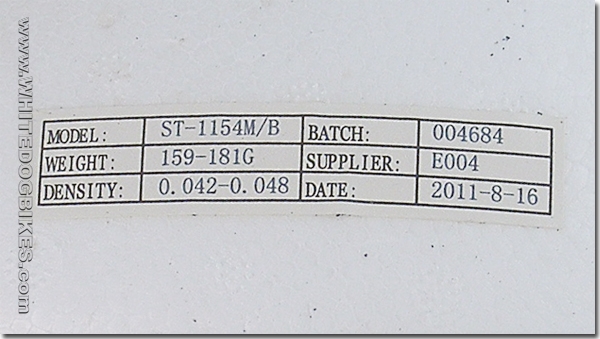 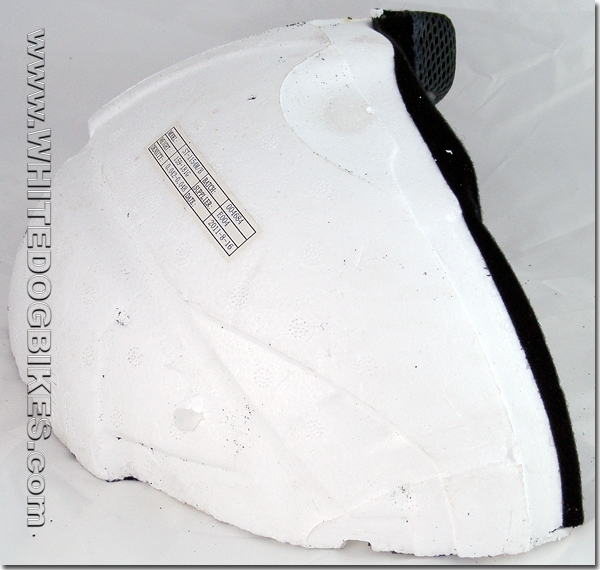 The visor and visor holder pods…..

The standard Nitro NGFP Panther visor is a 2.5mm thick, injection moulded visor with an anti scratch coating.
The injection molding process is where the base plastic is heated, mixed then forced into a mold where it cools and hardens to form the visor (injection moulding is a widely used manufacturing process and is often used to make car and motorbike bodywork panels!). 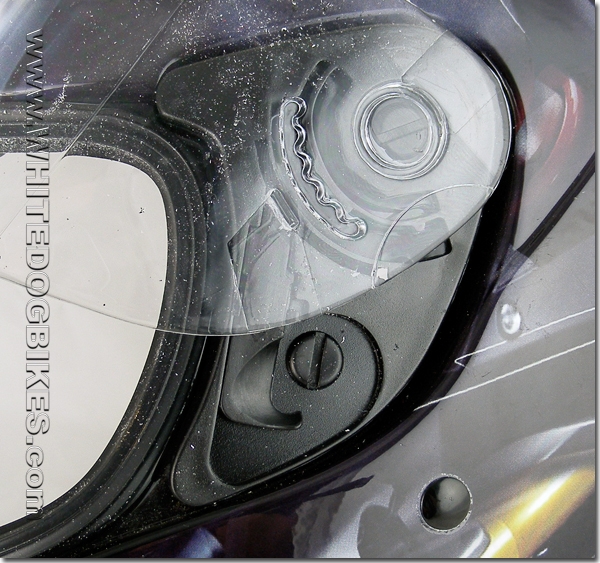 The standard NGFP Panther also has an ‘E’ mark (normally there’s a sticker on the visor with the E number details) and 2 holes (1 either side) for a Nitro ‘Pinlock’ visor insert.

It might be worth noting that Nitro have had problems with people selling cheap aftermarket (non genuine) visors on sites like Ebay. Some of these visors are made from much thinner, non shatter proof materials that are prone to breaking, shattering and scratching! 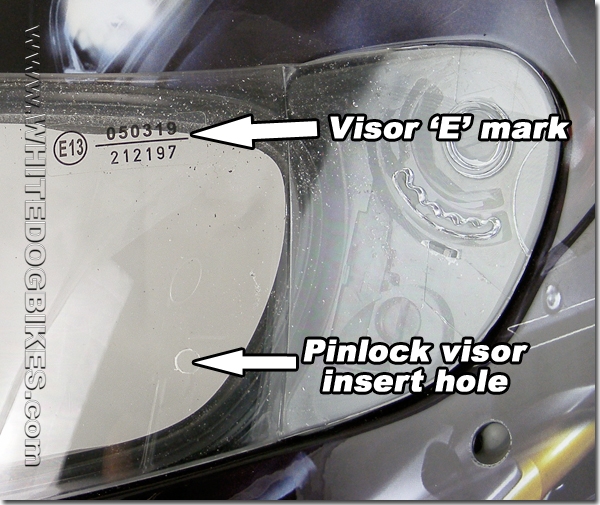 The visor on the Panther helmet has a quick release system and can easily be removed in a few seconds (with a little bit of practice!).
The system has a small ‘pull down’ button in the side pod. To release the visor, put the visor in the ‘open’ position on the helmet, pull down the catch with your finger of thumb, line the little tab on the visor up with the opening at the top of the pull down catch and the visor comes out.

To put the visor back on line up the tab on the back of the mounting ‘O’ on the visor with the slot, pull the finger tab down and push the smaller tab into the opening, release the tab and close the visor down. 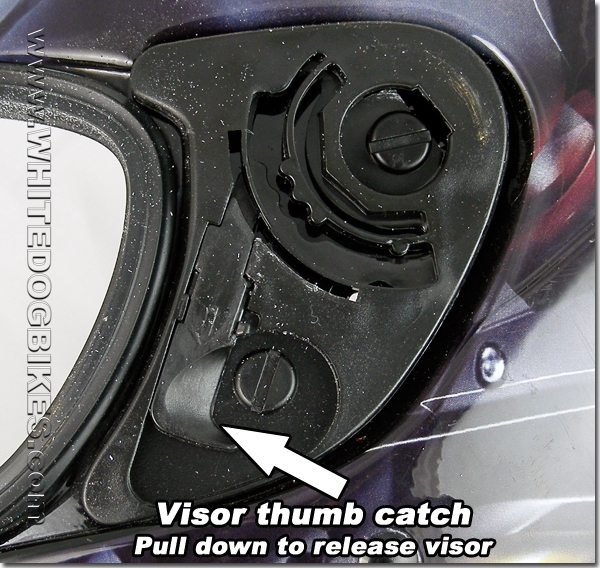 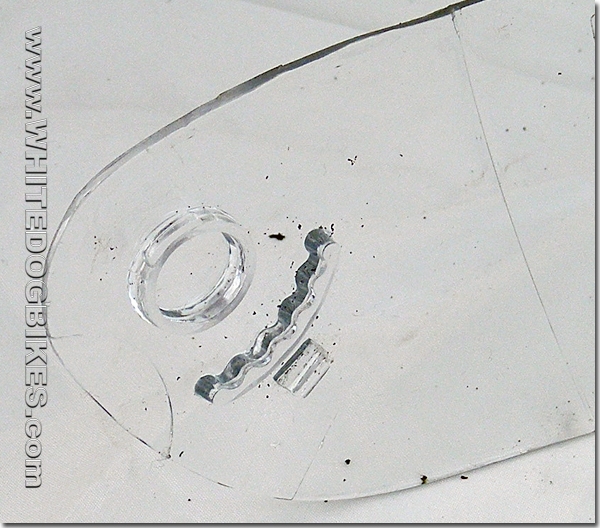 The mounting point on a Nitro NGFP visor

The side pods that the visor is mounted to are held in place by 2 screws mounted in brass studs set in the helmet (so it may be possible to replace these if they break?). 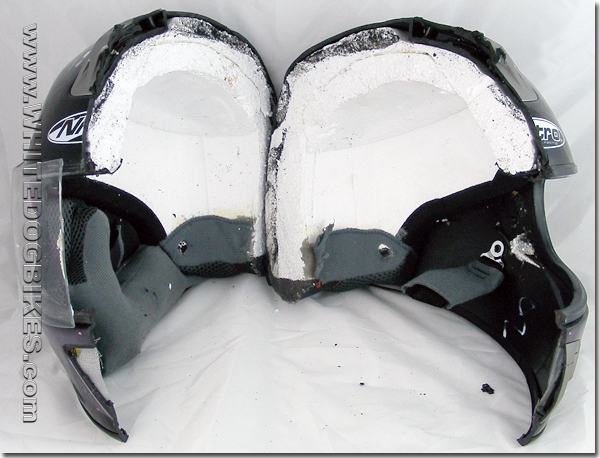 Nitro Panther helmet cut in half

And there you have it, the inner goings on of modern fullface motorbike helmets……

One thought on “Inside a Motorcycle Helmet…..”