Ever wondered what protects your head when your wearing a motorbike helmet? 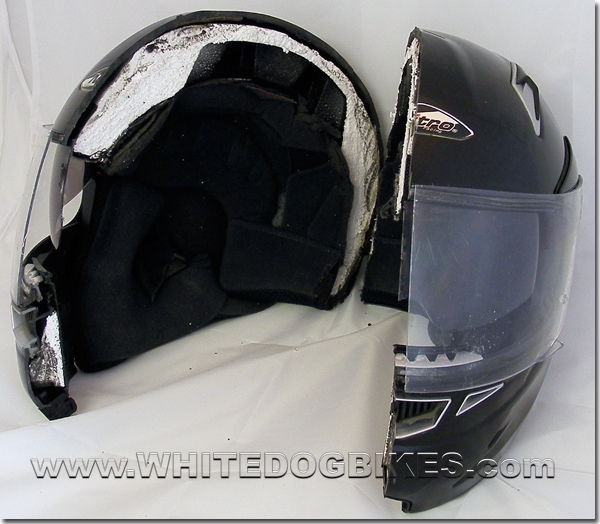 We have cut a Nitro Motorcycle Helmet (F341-VN flip front helmet – RRP £99.99) in half to reveal the inner workings. 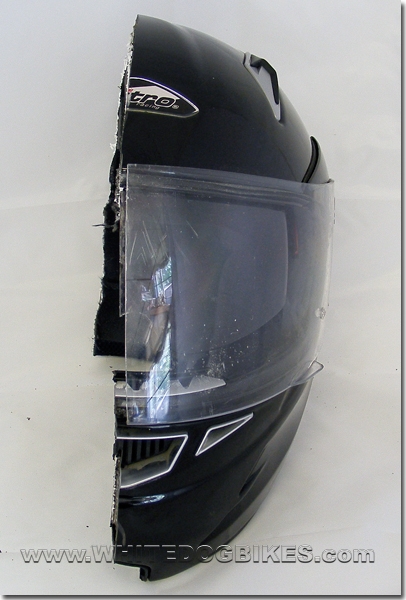 The Nitro F341 is the same helmet as the GMAC Futura flip up motorcycle helmet (bar a few badges!). 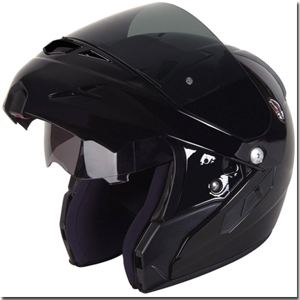 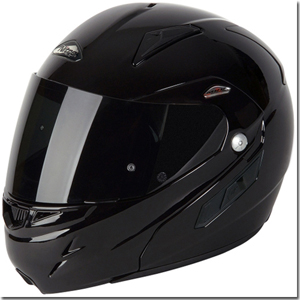 How did we cut the helmet in half?

We used an air cut off / grinding tool to cut the outer shell, a hacksaw to cut the inner packing and a sharp knife to cut the liner material. 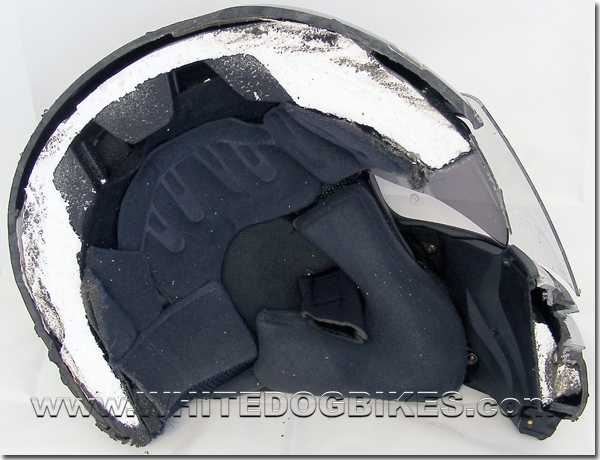 The helmet weighs 1.820kg in total and the multi poly tech construction outer shell is between 3mm and 6mm thick. The shell is thicker (up to 6mm) at the important impact areas (like the front and back of the head) and thinner (we’d guess to save weight?) on the less crucial areas (basically where an impact can’t occur, like round the base of the helmet). 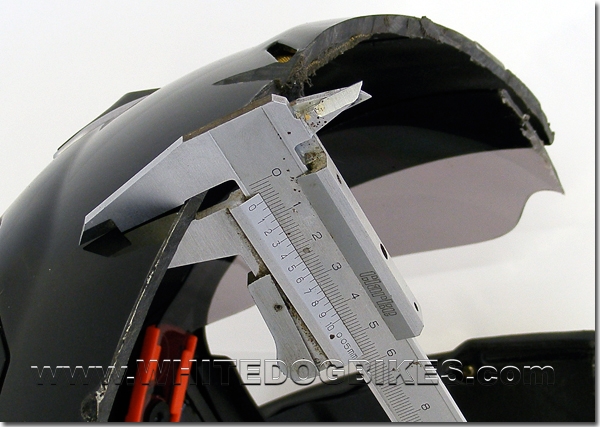 Interestingly, despite polycarbonate helmets being less resistant to heat then their fibre glass counterparts, this shell was fairly good at resisting heat and friction when we cut it. As it was cut, the heat didn’t seem to spread through the shell or soften the shell at all (we thought it may be similar to plastic that when you heat plastic the surrounding area softens as well).

The resulting cut mark on the shell wasn’t melted at all. The only slight melted bit’s were on the top edge of the cut line.

As a test we tried applying the shell to a 240 volt bench grinder and although the grinder cut into the shell, it was only about 1 to 2mm before the grinder bogged down and stopped. 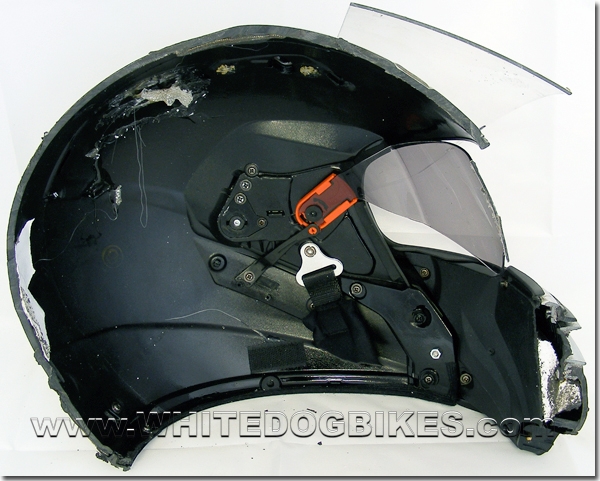 The Nitro F341-VN helmet (and the GMAC Futura helmet) have vents in the front, chin piece, vents in the top and an exhaust venting system in the rear. 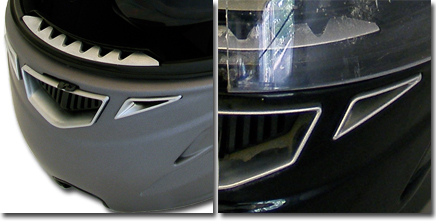 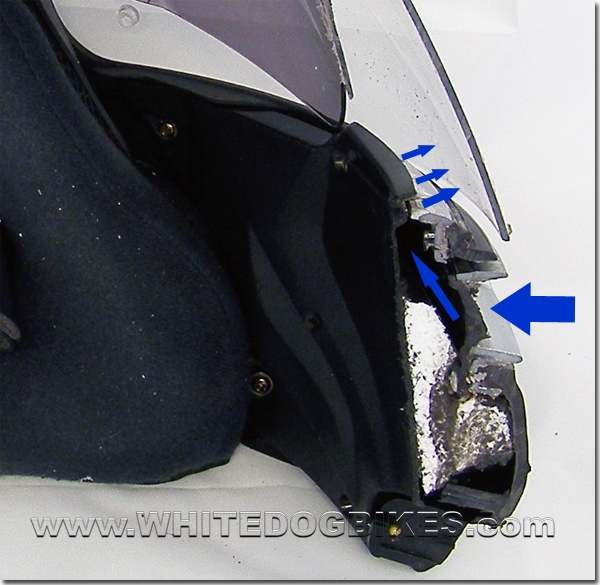 The top vents on this helmet have 2 purposes. As well as passing air onto the top of the head air from the vents is also diverted to the rear / exhaust vents. 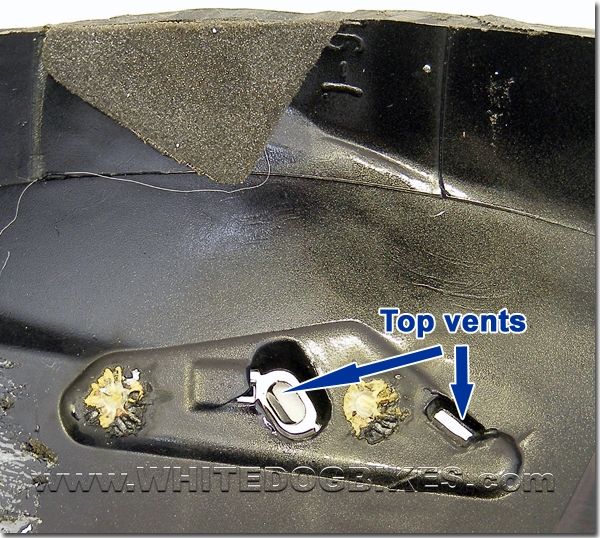 The rear vent works as an exhaust for the air brought into the helmet from the other vents. The rear exhaust vents also helps to stabilise the helmet when riding by allowing the air to flow around the interior of the shell and exit from the vent. 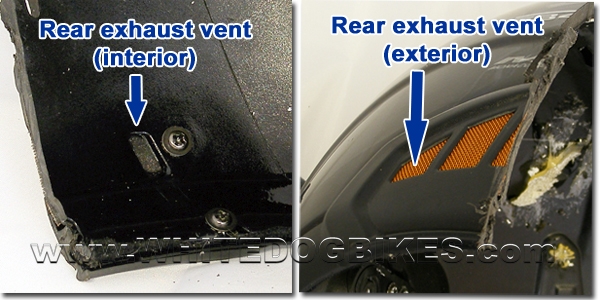 The chin strap and flip front 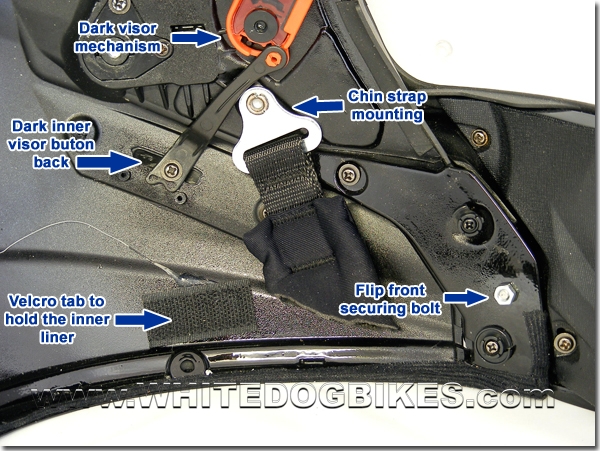 The flip front system is released by a button on the bottom/front of the helmet (unfortunately, the button did fly off somewhere when we cut the helmet in half!). 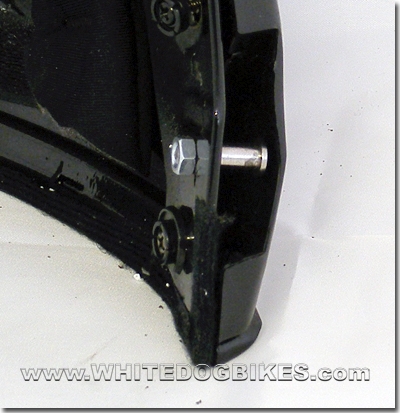 One of the main ways crash helmets absorb the impact in a crash is by using a polystyrene like material called EPS (expanded polystyrene foam) inside the helmet (between the shell and the helmet liner material). 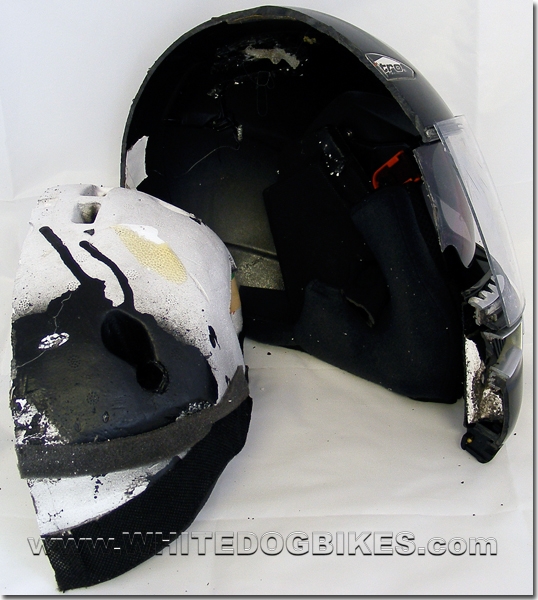 The EPS polystyrene liner fit’s very snugly with the other parts (like the cheek pads etc) and is also held in place with a super sticky glue. 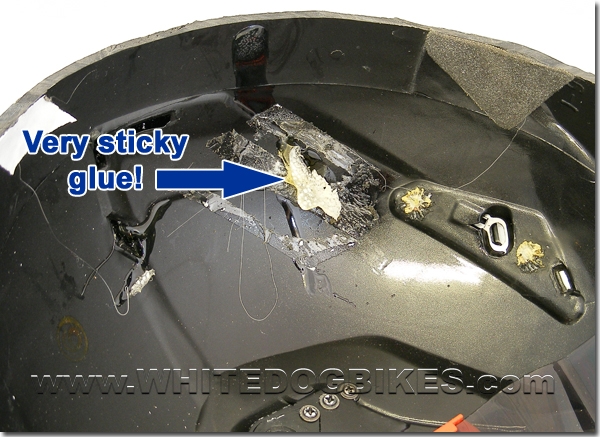 Although the material is similar to polystyrene, it is a highly compacted form of polystyrene and unlike conventional polystyrene (the kind used to pack new electrical goods in) it’s very difficult to squeeze or crush it with your hand. 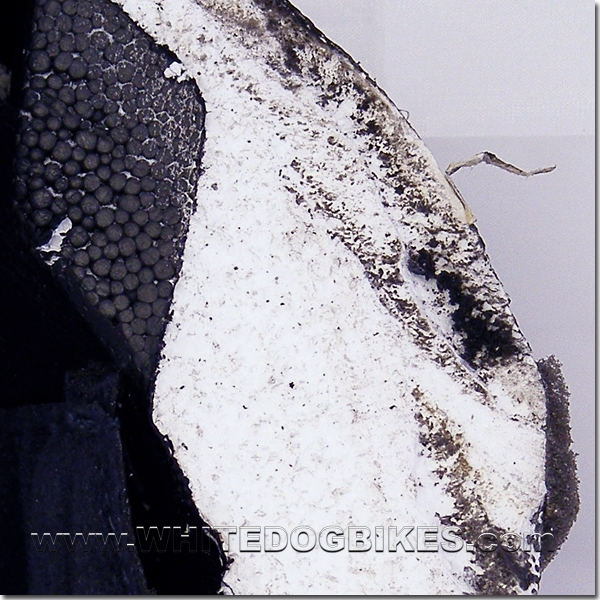 The other unique feature this EPS liner seems to possess is that, unlike conventional polystyrene, it doesn’t compress much. When a pressure is applied to it the area that the pressure goes on is ‘crushed’ and the surrounding areas remain intact. 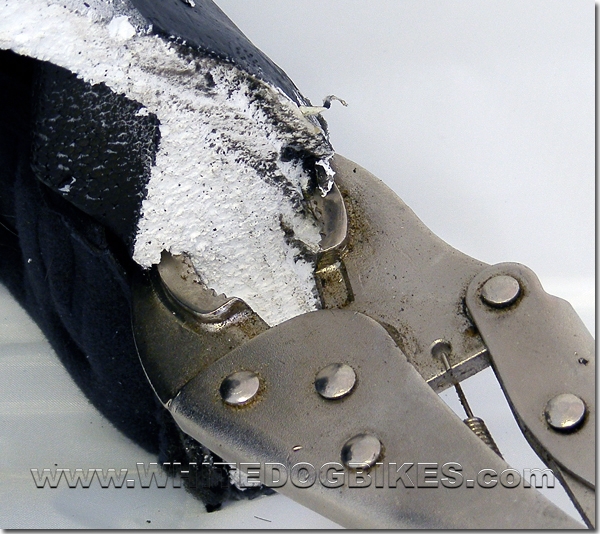 Although this is probably a safety feature that helps distribute and absorb the energy from a crash, it’s very unlikely any damage to this area would be seen, so this would probably be one of the MAIN reasons that a crash helmet should be replaced after an accident! 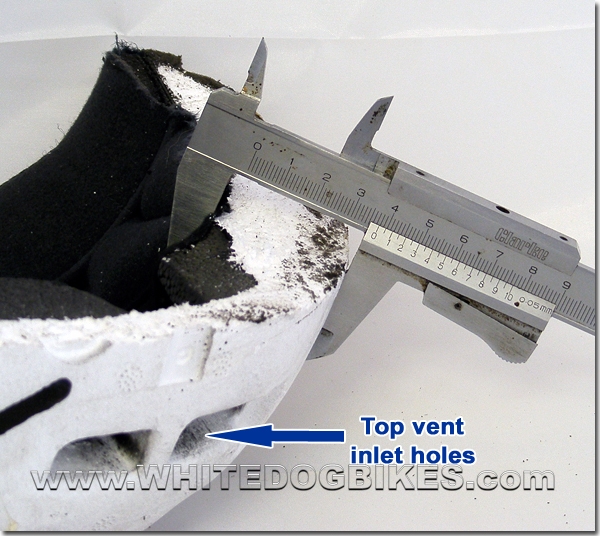 The EPS polystyrene liner is between 18mm and 45mm thick and, similar to the helmet shell, the liner is thicker on more important areas like the front and back of the head.
The image below shows which sections of the liner correspond to different areas of the head. 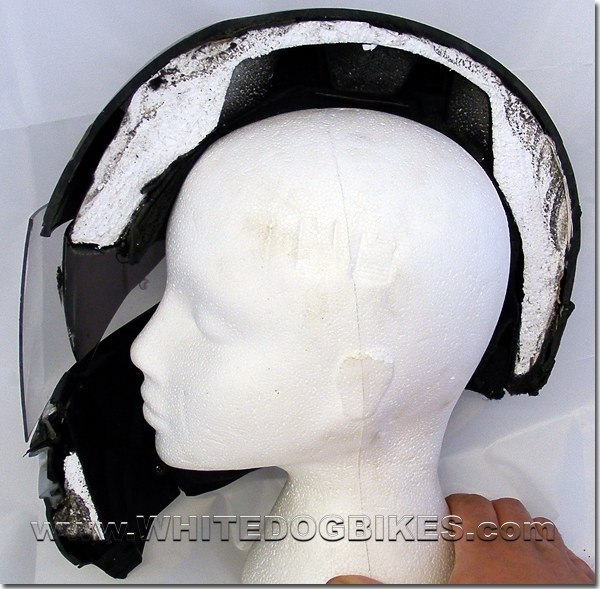 The liner also has channels in it to allow air from the top vents to cool the rider. 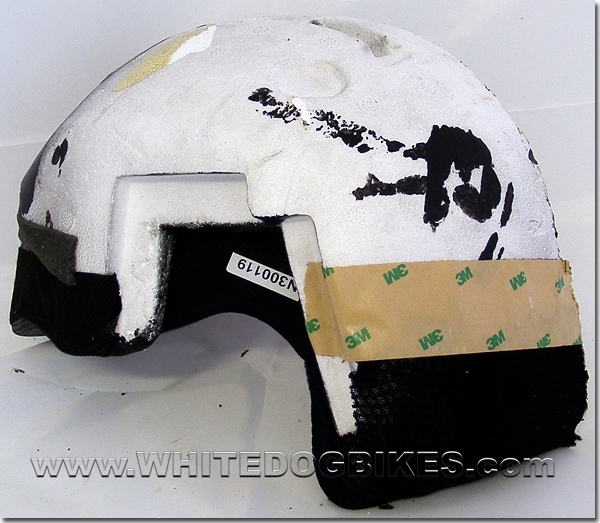 The side / visor holder pods….. 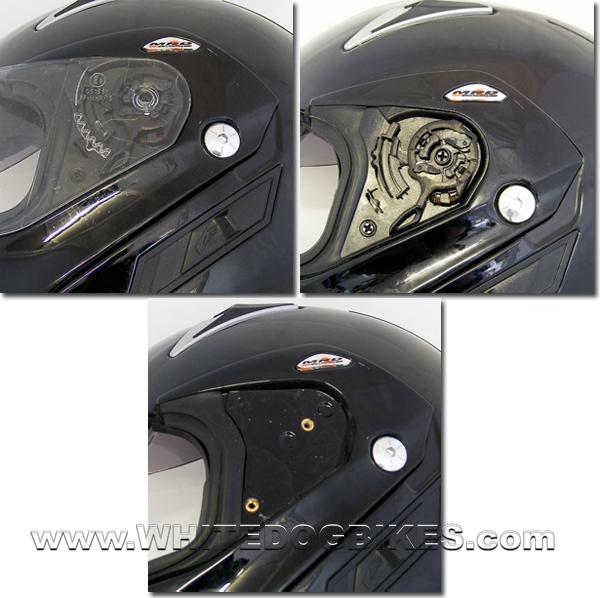 This helmet has a twin visor system. As well as the main, clear outer visor it has a retractable (operated by a button on the side of the helmet) dark inner visor. 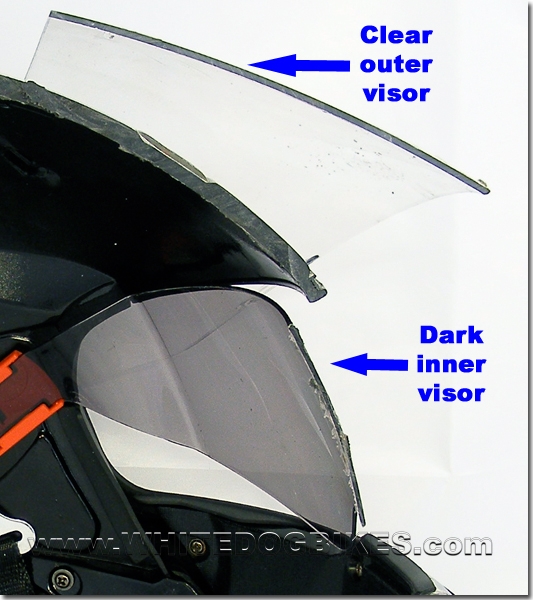 The inner, dark visor is around 1 to 1.5mm thick and, unlike the outer shell and outer, clear visor, doesn’t cut as cleanly and shows some signs of very light melting around the cutting edge.

The outer visor is 2mm thick and, similar to the shell, doesn’t melt and cut’s in half cleanly (mainly due to it’s shatter proof properties).
The image below shows a cross section of the outer visor. 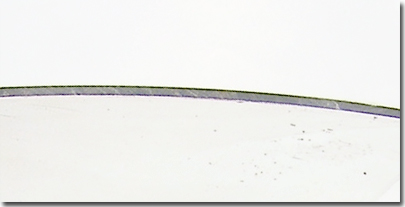 And there you go, some of the inner workings of a modern, flip front motorcycle helmet……

You can also see the inside of a full face motorcycle helmet here…..

Thanks to:
Nitro Helmets for donating the sacrificial helmet.

7 thoughts on “Inside a Flip Front Motorcycle Helmet…..”