The Kawasaki ZXR 750 J (J1 and J2 models) was a 749cc sports bike released in the UK between January 1991 and November 1992.
The ZXR750 J was an updated version of the Kawasaki ZXR750 H1 and H2 models and featured 43mm upside down (USD) forks, lighter, diamond section alloy chassis, new short stroke engine and 38mm CVKD carbs (aka constant velocity carb). 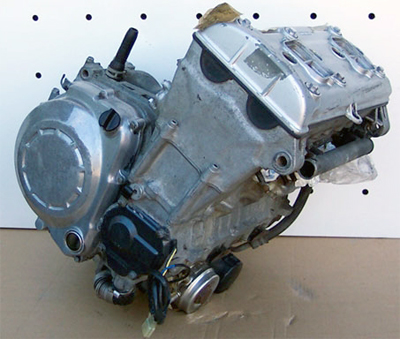 Useless stuff…….
Launched in 1991 the Kawasaki ZXR750 J was based on the 1989 to 1990 ZXR 750 H1 and H2 race replica supersports bikes and there are still plenty of these beasties around today.
The ZXR750 was a good bike in it’s day and was used for some racing series and although the ZXR out handled rivals like the GSXR750 and 1100 it was blown away a few years later (along with the FZR’s and GSXR’s) by the Honda Fireblade.

The ZXR750 J was restricted to 100bhp due to an upcoming European 100bhp ban supposedly coming to Europe around the time the J model was launched, but, as with most European laws the BHP ban was scrapped and never came into force.
Although the J model had less BHP then the earlier H models (107bhp) and the later K models (121bhp), the J model had good mid range power due to the lower brake horse power!

Although the ZXR750 J model was based on the earlier H1 and H2 models, unfortunately there aren’t many parts that are interchangeable between the 2 bikes as there were numerous changes between the H and J models (including different forks, engine and bodywork).

Buying advice…….
There are a fair few of these bikes around and you can pick up a good example with MOT for under £1000 privately.
Because of the racing history behind these bikes there are LOADS of ex-racers around (and racing mods like Harrison Billet 6 race calipers can be picked up for these bikes as well!).
These bikes were built to take a knock on the track (with beefed up yokes and spindles etc) so lightly crashed bikes can often easily be repaired.
Obviously, the youngest of these beasts will be around 20 years old now so the bikes do look a bit ‘long in the tooth’ and will have a few age related gremlins and they DON’T handle like more modern counterparts…….
Parts to watch out for when buying…..
Only parts to really check on the ZXR750 is the electrics (alternator, CDI etc) as these can be difficult to source.
The radiators, which due to the racing design of the rad (curved) alot of the ZXR750 radiators were used on other racing bikes and good examples are difficult to get hold of now!
And the upside down forks….
Unfortunately, upside down forks don’t fair well in the UK weather and, unless they’ve been rebuilt and the stanchions replaced they are likely to need work and parts.

Performance mods…….
Apart from the usual Dynojet and K and N filter type stuff there is a relatively simple engine mod if you want a bit more from your ZXR750.
If you put ZX7 pistons in a ZXR750 (it will need a rebore though as of ZX7’s are a couple of mm’s bigger bore) will increase the CC to around 790cc.

Disclaimer: The Kawasaki ZXR750 J specs and information on this page are correct to the best of our knowledge. But the info should NOT be taken as 100% accurate as we can, occasionally make mistakes!

If you think we’ve missed any important info out or have something to add, please feel free to leave a comment below 🙂 …