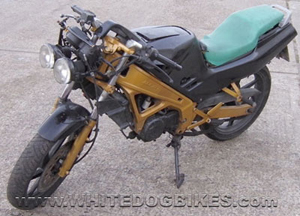 Please Note regarding above dates and models:
There were LOADS of grey import Honda NSR125R’s many of which were registered at different times to the official UK release dates.

Buying advice:
Hell, where to start! Unfortunately, as with most bikes that were made by Honda Italy, the NSR125R does have a few ‘built in’ gremlins…….
The starter motors were prone to failure due to them being mounted on the front of the engine (where they collected all the dirt from the front wheel!).
The RC valve system can be problematic, usually either due to the control box being faulty or the servo playing up (or both!).
Electrics and wiring were never great on these bikes either.
There were also subtle changes between all the NSR125’s manufactured for different countries, which can make sourcing spare parts a bit of a problem!
If your buying one, buy it cheap and have a back up bike if your planning on using it for getting to work ever day.

Sources/Thanks to:
Wiki article about the NSR125