…..And how it can ruin your bike engine! 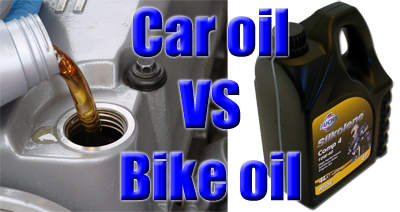 The recession is hitting some industries hard now and some companies will do ANYTHING to sell their products…..

But how does this affect using car oil in a motorcycle engine?

Well, it’s a price thing. Car oil blenders have been aggressively competing for large car oil contracts (to supply major car manufacturers with oil for their new cars and dealers workshops) for years.

The ‘competing’ is largely done by price, so if you need a fully synthetic 5w40 API SL rated oil for your new, state of the art diesel car, oil blenders will contact you and say they can make the oil for £XX per litre. Then you decide which oil you want to use (in reality it is alot more complicated then that!).
As was pointed out in Using car oils in a motorbike engine. Part 1, what you see on the oil bottle label ISN’T always whats in the bottle!
Things have got so desperate in the car oil industry the the oils often can’t be blended for the price they are being sold to car manufacturers for (basically, the base oil and additive packs cost more then the oil is being sold for!).

While this may seem good as it means cheaper oil for your car (or your motorbike??!!), the reality is that corners are being cut during the blending process to save money and try and squeeze out some kind of minimal profit from the oil which means that while the oil might say (for example) fully synthetic 5w40 oil on the bottle, what is actually in the bottle is a barely semi synthetic 15w50 that will turn to black sludge within 1000 miles!

So why, if the oil in the bottle is different from what it says on the label isn’t something being done?

Honestly? Because nobody cares!
The ‘nobody cares’ theory was tested by an oil blender recently who lost out on a contract to supply car oil due to price (they were more expensive).
After looking at the price the other company offered they came to the conclusion that the oil can’t be blended at that price, so they sent a sample of the other blenders oil off for testing.
The results came back and the oil didn’t even closely match the original manufacturers spec (hence how they were able to supply the oil for a much cheaper price!).

The results were shown to the manufacturer, who didn’t care, other Government bodies (Trading Standards etc) weren’t interested either!

How do I know your not making this up to try and get me to buy motorcycle oil instead of car oil?

Modern car engines are incredibly fussy when it comes to oil (especially diesel engines!).
Next time your on the motorway have a look at the number of later reg (2008 onwards) smokey diesel cars on the road.
You will probably be surprised by the number you see and most of these smokey engines will be due to poor quality car engine oils used…….

At the end of the day, buying a good, quality Motorcycle Oil is cheaper then having the engine rebuilt!